This page is for the enhanced remake. For the original game, see Cave Story.

Three versions of the soundtrack plus two graphics modes.
Development for this version has been abandoned, as shown by the Mac version being broken by default,[citation needed] and missing features from the Switch release.

The game supports XDG on Linux, but crashes when the value is set.

Profile.dat stores save game data.
The Steam save games on OS X and Linux are not compatible with the DRM-free and Steam for Windows versions. 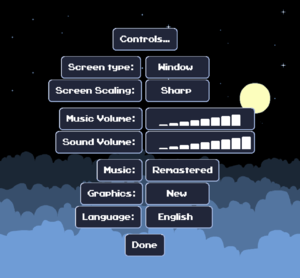 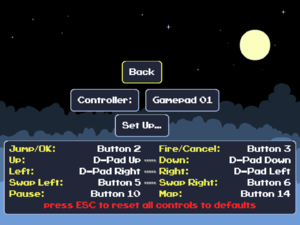 Game will not start, or crashes on start[edit]

If the game loads to a black screen in Windows 7, setting the game to compatibility mode may fix the problem.

Allows the porting of the mods from Cave Story into the Cave Story+.
Can be used to install already ported Cave Story+ mods with minimal errors.
Cave Story Mods converted to run with few compatibility problems.

Cave Story with a fourth ending[edit]

A fix for the WiiWare, or "New" soundtrack.
Comes as a set of Ogg files to replace, go to Steam directory (Such as Steam/steamapps/common/Cave Story+/data/base) and replace the existing Ogg folder with the downloaded one.
Completely functional replacement.