Apex Legends is an online multiplayer battle royale FPS released by Respawn Entertainment. It is set in the Titanfall universe and uses the same Source engine as used in Titanfall and Titanfall 2.[1]

Apex Legends released on Origin on February 4, 2019. At launch, many players experienced issues with crash to desktop at random intervals, which appears to have been fixed for many PC players in a stability patch on March 22, 2019.[2] The game is one of the most popular online PC games, reaching a reported 70 million players (on all platforms) on October 29, 2019,[3] although this figure does not reflect concurrent players or PC-only players.

As of May 2020, the game remains very popular and is regularly updated with new free content as well as microtransactions and a new Season Pass approximately every 3 months,[4] and has a very active playerbase worldwide. Season 5: Fortune's Favor, a content update, was released May 12, 2020.[5] Following the announcement of a partnership between EA and Valve on October 29, 2019, Apex Legends was released on Steam on November 5, 2020, supporting cross-platform play with Origin.[6]

All versions require an EA account and a constant internet connection for all game modes.

Locale is saved in %PROGRAMDATA%\Origin\LocalContent\Apex\Origin.OFR.50.0002694.dat 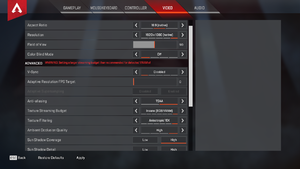 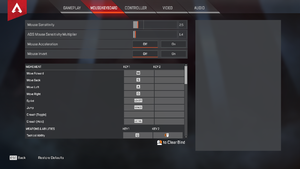 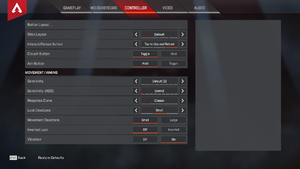 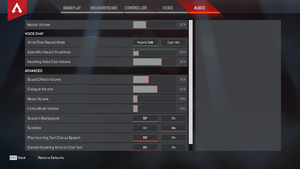 When pressing Ready, the game states Party Not Ready, even when playing alone.

There have been numerous reports of crash to desktop on both Nvidia and AMD GPUs.[15][citation needed]

Some Nvidia drivers might not properly detect Apex Legends as a game and automatically select and make use of the Nvidia discrete GPU to render the game on Nvidia Optimus platforms, instead it will default to using the integrated GPU that resides in the CPU (Intel-based GPU).

The game can feel stuttery even at higher framerates which is most likely caused by inconsistent frametimes.

Tweaking "Model Detail" adds considerable amounts of detail to cliffs, rocks, trees, and other game elements. In addition, higher detail levels will reduce the degree of pop-in as you move quickly through a level, increasing image quality and immersion.

View this Steam Support Article regarding launch options as well as the relevant Valve Developer wiki page for further information and a list of useful Source engine launch options.
These arguments can be set in Steam, Origin or in the shortcut for the game executable.
-high can cause an issue where the Apex client believes there is an Origin update. Remove -high if you have this problem. Example screenshot here.
NVIDIA Reflex Low Latency requires a Geforce GTX 9xx GPU at minimum, and graphics drivers of version 456.71 or higher.

The game requires CPU with SSSE3 and POPCNT instructions.[19][20] Pre-Nehalem/Silvermont and pre-Bulldozer/Bobcat chips are unsupported.