Hi, so I saw that you made an edit to the Rayman 1 article claiming there exists a Spanish translation on a limited retail release, can you specify which release contains the Spanish translation? By searching on ebay the only release I found that could possibly contain it is the one published by "El Mundo", is this the one you're talking about?

That's the one, it was released back in 2002. Here's an screenshot of the translation: 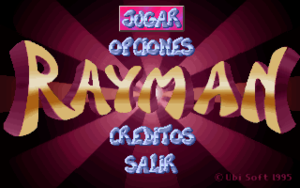 According to Rayman Fanpage, Ubisoft themselves reissued the game with this translation in 2005 for the "Codegame Kids" series of budget releases.

There is another Rayman Spanish budget release under the "Codegame" brand, but it doesn't seems to be in Spanish.

Ah, thanks for confirming, this version has surprisingly not been very well documented until now! I just bought this version a few days ago, so I was worried it wasn't actually going to be translated to Spanish.