Difference between revisions of "The Suffering: Ties That Bind"

Numeric Keypad is required to progress.

StarForce DRM for this game does not work on modern versions of Windows (see above for affected versions).
Not available for sale on GOG in Germany. 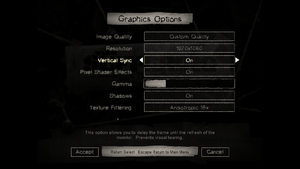 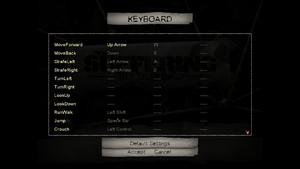 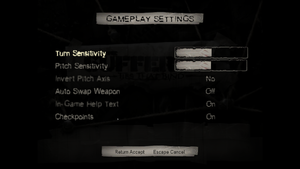 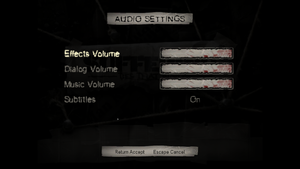 When using a 16:9 resolution, objects at the left and right edge of the screen don't get rendered, very noticeable when turning with the mouse. This is because the game is only rendering for 4:3 resolutions. The effect is fairly small when using 1920x1080 or 2560x1440, but it becomes insufferable in 4k.[5]

Using any of the above widescreen fixes will make the right side of the screen stretched when accessing the in-game encyclopedia. This doesn't happen when using 16:9 without the mods.

Visual artifacts with certain weapons in 4:3

In 4:3 resolutions, there sometimes is a visual issue with certain guns (especially the Tommy Gun). When being in first person, changing to 3rd person and then back to 1st, a lot of the character's body will be rendered at the bottom of the screen and clipping into the gun. For most weapons (especially dual-wielded guns) this luckily doesn't occur.

A good compromise is to play in 2560x1440 and with standard FOV (1.0). This removes the visual glitch and at the same time keeps the rendering problems low.

Shortly after the player gains control in the opening prison courtyard, the game freezes.

When using The Suffering Series AiO Patch, the game will set monitor's refresh rate to 60 Hz when in fullscreen mode.

Very low FPS when activating vsync in the game