Difference between revisions of "The Elder Scrolls III: Morrowind"

For Windows 8 and later apply The Elder Scrolls III: Morrowind fullscreen border fix.
OpenMW is an open-source engine that improves some technical drawbacks and adds native support for MacOS and Linux.
Active modding community.
A wide array of bugs have been fixed through community patches.

The in-game soundtrack can be found at <path-to-game>\Data Files\Music in 128kbit/s MP3. These differ in arrangement from the versions on the official soundtrack.

The Game of the Year Edition includes both expansions and the latest patches. All digital distribution versions are the Game of the Year Edition and are already fully patched.
The Elder Scrolls Anthology includes both a retail version and a single Steam key that unlocks Morrowind, Oblivion and Skyrim.[7]
The retail and GOG.com versions include The Elder Scrolls Construction Set.[5] The Bethesda.net and Steam versions do not include the Construction Set.[6]
The GameStop PC Downloads/Impulse version is not compatible with some mods.[8] This version is no longer sold.

This section may require cleanup to meet basic quality standards. The specific problem is: Test intercompatibility between the mods and patches listed here. You can help by modifying the article. The discussion page may contain useful suggestions.

The Game of the Year Edition and the digital distribution versions are already fully patched.

Aims to fix the bugs in the game without controversial rebalancing or additions.[9]

Fixes for the Official Plug-Ins (freely available via UESP, included in the GOG edition)
Comes in merged and individual forms, as well as compatibility variants
Has non-vanilla enhancements in PikachunoTM's Misc Mods

Delays Tribunal's Dark Brotherhood hit on the player significantly and adds sanity check.
Not everyone knows about Bloodmoon's Solstheim and immediately tells you to go there, also has sanity checks.

Fixes bugs in the Morrowind executable that could not be covered by the Morrowind Patch Project.
Includes several optional gameplay enhancements, such as a sneak toggle and smoother magic casting.
Modifies the executable. To revert to vanilla, use Morrowind.Original.exe.[10]

Greatly improves performance of outdoor (and to a degree indoor) performance

Fixes scripting errors to reduce save bloat and improve stability.

Requires both the Tribunal and Bloodmoon expansions.
The official plugins are included in the patch.
Fixes several hundred bugs and inconsistencies not covered by the official patches. Including edits of Russian localization

Improves stability on systems with at least 3GB RAM by allowing the application to use more than 2GB RAM. Particularly useful when using large numbers of mods or heavily scripted mods.
Included with Patch for Purists.

Allows you to select any resolution, custom FOV, variety of shaders any many other options
An updated fork of MGE with expanded features, bug fixes and performance enhancements over standard MGE. 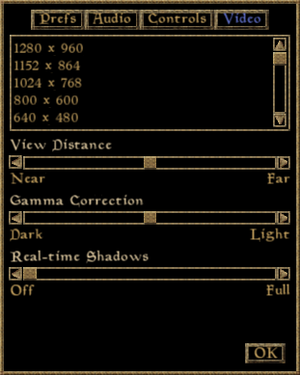 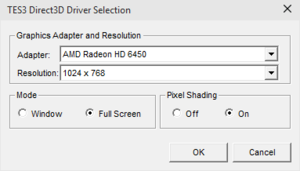 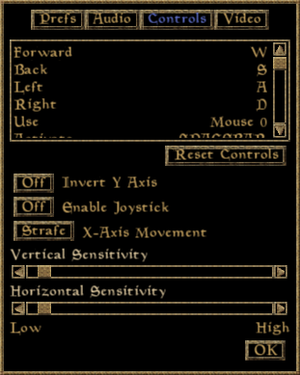 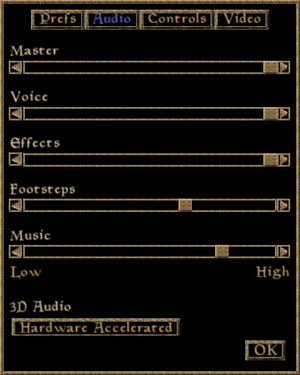 Crashing During Install or Launch

Crash After a Few Minutes of Play

Unable to construct potions, due to a wrong message it does not have a name

Morrowind does not go fullscreen correctly on Windows 8 and later.

Retail version does not work

Install the latest Patches to remove the incompatible SafeDisc protection from the retail version.[4]

Open-source re-implementation of game's engine
Allows Morrowind to be played natively on Windows, MacOS, and Linux. It allows for technical drawbacks to be fixed at the level of the engine, as well as enhance the game by correcting design flaws such as savegame "doubling" and improving physics, combat, AI, and graphics.[17] OpenMW requires a legal copy of the game in order to play Morrowind.[18]

Not all mods are compatible with the engine, the official wiki maintains a compatibility guide.
Mod installation guides are available on the wiki or in the documentation

A high resolution replacements for Morrowind's Magic Cards font, used in most of the UI and for the Daedric font used in scrolls.
Both mods have special version for Polish fonts compatibility.

Modernizes combat by removing the dice roll hit chance and changing parts of the game that were built around it.
Includes other popular gameplay tweeks.
Compatible with Tamriel Rebuilt and Morrowind Rebirth.

MGSO/MO is ancient and will likely have issues with any modern install
Thastus is a pretty solid guide, though it has many small mods.
Morrowind Graphics Guide is a bit simpler. Compare and contrast.

Many users have experienced issues with the game merely displaying a black screen past the main menu. There are two causes of this issue - their solutions are outlined below:

Powerful and easy to use mod manager with mod virtualization, in order to keep the installation folder clean.