Difference between revisions of "The Binding of Isaac: Rebirth"

This page is for the 2014 remake. For the original game, see The Binding of Isaac.

An unofficial patch for The Binding of Isaac: Afterbith+.
Fixes many sprite and visual errors.

Adds an in-game menu that allows to configure compatible mods.

Adds minimap mode that allows visibility of an entire floor without being enlarged.
Adds unique icons for pickups, slot machines and beggars.

Antibirth is an expansion that brings additional new content. It can be downloaded from the official website.
Incompatible with Afterbirth and Afterbirth+ DLC.
Antibirth is included in the Repentance DLC.[1]

Currently there are problems with save game syncing on OS X. 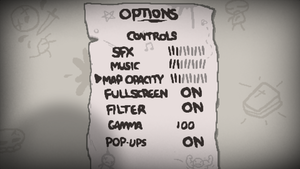 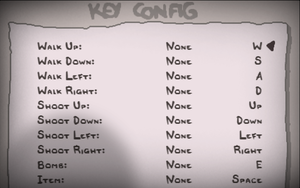 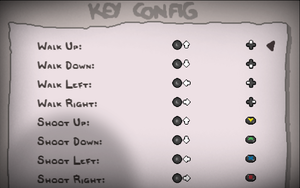 Some wireless keyboards might have the same problem, as there is a limited number of combinations of keypresses these keyboards can transmit. Try altering the controls until the issue is resolved.
Seems to occur mostly with the Logitech G110 keyboard, but other models might be affected as well.

Usually, the music may work but sound effects are either missing or only transmitting from one side of a pair of Stereo speakers.

Some players with strong systems report the game running too fast or too slow.

Some users are experiencing crackling or scrambled audio with audio devices connected via USB.

Motion sickness caused by the camera[edit]