This game is no longer sold digitally.

All DLCs from console versions are built-in. 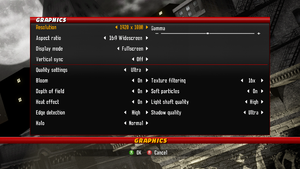 Upon launching the game might be stuck on an unsupported resolution that causes the title screen to display incorrectly and to crash upon entering gameplay with attempts to switch it in the menu leaving it on the especially unsupported 0x0 resolution.

Only a black screen and the HUD is visible[edit]

The frame rate may occasionally be erratic, resulting in a choppy feel.