Difference between revisions of "SimCity 3000"

Use the compatibility fixes to fix issues with the interface frame rate and windowed mode on modern versions of Windows.

SafeDisc retail DRM does not work on Windows Vista and later (see above for affected versions).
Demo

In May 2000, the game was re-released under different names in different regions, such as SimCity 3000 Unlimited (in North America and Oceania), SimCity 3000 Deutschland (Germany), SimCity 3000 Korea (South Korea), SimCity 3000 UK Edition (UK and Ireland) and SimCity 3000 World Edition (other countries), among others. This added, among other things, East Asian and European building sets, additional terrain colors and vegetation types, a snapshot feature, additional music, an improved version of the Building Architect Tool (a pseudo-3D design tool based on cubes), four additional disasters (such as locusts and space junk), additional landmarks (like the Seoul Tower and Helsinki Cathedral), new reward buildings, thirteen scenarios (along with an editor based on Microsoft Access) and a new FMV intro.

The following python script allows you to install the game into the modern Linux system much easier, which can be found here. Works only with Ubuntu and Debian or any distribution based on these two.

Cities (*.sc3) can be saved anywhere; this is the default location. 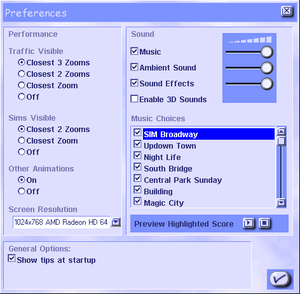 The game must be running in 16-bit color mode (you can use the compatibility fixes to apply this).

GOG had released a modified executable file on their support page to enable widescreen resolution. Only works on the Unlimited edition. See WSGF entry for original game fix.

Use the compatibility fixes to fix issues with interface frame rates on modern versions of Windows. Computer running Slow

The Unlimited edition is missing the track "SIM Broadway". Tracks "Concrete Jungle", "City of Dreams" and "SimCity 2000 Theme" are both disabled in AUDIO.ini file.

Game crashes at startup in Windows 10

Game crashes at startup after a few seconds in Windows 10. The executable file creates an error log file SC3U_stkdmp.txt in which phrases such as "Exception code: C0000005 ACCESS_VIOLATION", and "Fault Address: <game-installation-path>\apps\GZGraphicD.dll" is included.