SafeDisc retail DRM does not work on Windows Vista and later (see above for affected versions).
A free trial version of the Gold Edition is available from GameFront.

fan patch v8 - Multiple fixes to v1.22 Conquests.
flintlock's patch - Multiple bugfixes and QoL improvements to v1.22 Conquests (GOG/Steam version only), more stable than the fan patch above.
Fitted Irrigation with Farm Houses - Makes irrigation look more natural and not jut out into the water.
River Deltas - Covers up the problem where some deltas are too far out to sea and others are too recessed
Fixed Transport Window Leftovers - Fixes left over artifacts from the transport window

The configuration file is generated only after the first time the game is started. 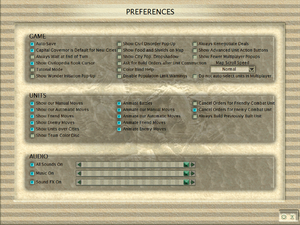 Either expansion pack is required, as the base game does not have multiplayer support.

No music or sound effects during diplomacy

This is an error caused by a Windows 10 update limiting sound to two channels.