Controller is recommended over keyboard and mouse,[2] unless using the Input Overhaul Mod.
The High graphics preset defaults to 8x MSAA. The Ambient Occlusion setting on the other hand utilizes SMAA. Using both in conjunction can cause graphical glitches, see Anti-aliasing[3]
Use FAR and lower Global illumination of the game to increase performance with minimal noticeable visual difference.[3]
Fullscreen mode outputs to a stretched and non-native resolution, unless fixed by using FAR.[3][4]
Playing the game through separate Steam accounts on a shared account in Windows can cause saves to be overwritten! See the unresolved issue section for more information.

Steam version requires Denuvo Anti-Tamper DRM.[7][8]
HiDPI users with a desktop shortcut may want to change the icon of the shortcut to <path-to-game>\NieRAutomata.exe as this includes a 256x256 icon for the game.

Standard Edition is the base Steam edition of the game with no additional bonus content that was made available after the Day One Edition promotion ended.
Day One Edition was a limited Steam edition bundled with additional bonus digital content (cosmetics only). The promotion for digital copies ended 16:00 GMT May 12, 2017.
Game of the YoRHa Edition is a compilation edition released on Steam February 26, 2019 bundled with all previously released DLCs and bonus cosmetics in addition to 2 exclusive wallpapers.[9] This bundle did not come with any actual code related changes to the game itself. The only new thing introduced was the two exclusive wallpapers, available entirely outside of the game.
BECOME AS GODS Edition is a compilation edition released on Microsoft Store on March 18, 2021 which brought with it various graphical enhancements and fixes.[1]

The Steam version validates the SteamID64 of the user against the ID embedded in the save files, and hides saves that does not match. Use SteamID64 Editor to transfer saves between users. As a result of this, playing the game through separate Steam accounts on a shared account in Windows can cause saves to be overwritten! See the unresolved issue section for more information. 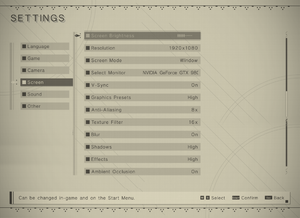 The High graphics preset defaults to 8x MSAA. The Ambient Occlusion setting on the other hand utilizes SMAA.[3][23]
Having the Anti-aliasing (AA) option enabled in conjunction with Ambient Occlusion (AO) causes visual issues and the transition effect between LoD levels to be abrupt.[23][24]

The game outputs at an exact 60 Hz; regardless if it is unsupported.[4]

The game defaults to using a 800x450 buffer for ambient occlusion regardless of render resolution.[27]

Occasionally the game causes a display driver crash/reset which it can not recover properly from.[3][33]
Official fix for affected users is to update their display drivers; AMD users should at least use v17.5.2[34] and Nvidia GeForce GTX 780 and 780 Ti users v384.94,[35] although some users might still experience the issue.[36]
The game continues playing in the background so if you're in a save zone you can quick save your progress by clicking on Esc+↵ Enter+↵ Enter. You should hear a chime sound effect when the game have been saved successfully.
Terminate the game using either Alt+F4 or Alt+Tab ↹ followed by terminating it through the Task Manager in Windows.
Users can mitigate the issue in various ways. An aggregated list of what might work can be found in the chapter What is the White Screen Issue? of this guide.

The game crashes once you die for the 21st time during the Shoot 'em Up level of ending E.[40]
The issue was introduced in the PC patch released on 2017-04-28.
This can technically be worked around by downgrading the game to an earlier version, however it is generally not recommended to do so. Refer to the Downgrade NieR:Automata chapter of this guide for details.

The debug menu requires a controller to be opened and navigated since Evade does not have a dedicated keybinding for keyboards.[42]

The game streams a lot of data all at once from the drive when passing invisible area thresholds, causing frame render times to spike above the necessary 16.67 ms to achieve a stable 60 FPS at all times.[43]
Installing the game on a SSD helps for most users. Users can also exclude the <path-to-game>\data folder from their anti-malware software to minimize additional input/output operations that might otherwise occur.
If stuttering severity increases with the length of time the game has been running, users can select NieRAutomata.exe in the Details tab of Task Manager and change the Priority to High.
Not even a RAM Disk is capable of solving the issue entirely.[43]

On some TVs/monitors the game outputs in interlaced scan mode.[59]