Difference between revisions of "Need for Speed: Most Wanted"

SafeDisc retail DRM does not work on Windows Vista and later (see above for affected versions).
This game is not available digitally.
A faithful higher resolution desktop icon can be found on the community site.
A playable demo is available. (its speed.exe can be used in retail 1.2 version of the game; may be incompatible with widescreen mod)

Patch 1.3 is the last patch for the game. Resolves a number of issues and is strongly recommended.[4]

Recreation of NFSMW 2005's UI from scratch using mostly vector materials, with original texture proportions to help keep the same look. Images are AI upscaled.
If you plan on using Xbox 360 stuff pack, make sure you install this mod first, and the Xbox 360 pack second.

Replaces the in-game 36 kHz music with its 44.1 kHz counterparts.[citation needed] 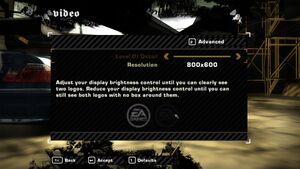 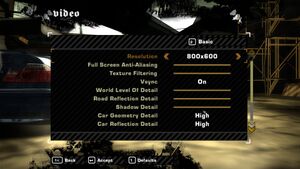 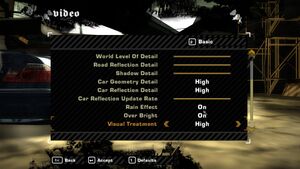 By default, the game plays sound in 22.05 kHz. To change into high quality 44.1 kHz, set level of details to 2 or max (sometimes to level 3), and restart the game.[citation needed]

Game crashes when executed in Asian languages in Windows 10

Chinese (Traditional), Japanese, Korean and Thai are not working in Windows 10 and there's no fix except to change the language to other than these.

This problem occurs because both games use the same name for their main executables (speed.exe). After installing one game and attempting to install the other, its autorun program assumes it's already been installed.

On a PC with Intel GPU (or with Nvidia Optimus technology), the Shadow detail option is inactive.

Includes Quality of Life improvements and fixes to the vanilla game to make the experience better.
Adds a lot of optional options to play around with.

Script mod which fixes some issues and makes some improvements for added cars(if you're planning on adding any).
Not compatible with ModLoader

This mod aims to restore the custom brakes leftover from NFS Underground 2.

Shaders, water, textures, reflections, screen filter, skybox, normal maps and more taken from or modified to look like the Xbox 360 version, where they are superior.
Not compatible with ModLoader.
If you want to use this with upscaled HUD, make sure you install the HUD before this mod.

Standalone script that enables dynamic shadows in the front-end, like in the Xbox 360 version.

A port of high quality 1024x vinyls from the Xbox 360 version and optionally re-adds the cut vinyls for every tunable car.

Basic implementation of Xbox rain droplets from SkyGFX for other games.

Can be used to change the camera, time speed, and HUD visibility.

A mod that returns almost every cut content from NFS Most Wanted.
Has very poor mod support and is likely to be incompatible with most.
Requires new save game