Difference between revisions of "Harry Potter and the Philosopher's Stone"

Released as Harry Potter and the Sorcerer's Stone in North America. 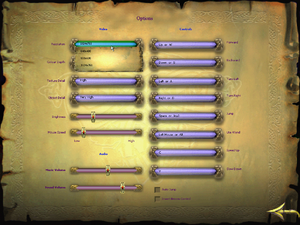 This fix is only compatible with the North American version

A fork of Kentie's Direct3D 10 renderer that adds more graphical features.
Might cause some bugs and slow rendering in a quest with Filch.
It is compatible with both the Widescreen Patch and Mouse and Strafing Fix.[5]
Runs the game at HD resolution.
Improved lighting.
Adds ambient occlusion, screen space reflections, and higher quality HDR post-processing.
Places a watermark in the bottom right, and overrides the user's clipboard with a link to the developer's PayPal. Follow these instructions to disable the watermark and remove the PayPal link from being inserted into your clipboard.

Only available in retail release. Dutch

Only available in retail release. Russian

Only available in retail release. Slovak

Only available in retail release.

Installing fanmade patches will usually reset the game's language to English in the European release. To change the language, enter the "System" folder on the CD. 3 folders named 0, 1 and 2 can be found there, containing the English (0), French (1) and German (2) language files respectively. In order to manually change the game back to the desired language, copy the desired folder somewhere and manually change all the file endings to .eng from .fre or .ger (i.e. HPcredits.ger renamed to -> HPcredits.eng), then copy and paste the folder content into the "System" folder of the game's directory and overwrite everything.

The game fails to start

The game requires a form of DRM, known as SafeDisc implemented in secdrv.sys. Unfortunately, it is a gaping security flaw, and evidently couldn't be fixed without being removed. Microsoft disabled it in Windows 7 and removed it in Windows 10. The following has been tested in Windows 7 to work.

Certain transparent effects and textures are not rendered properly

Might fix sound issues in other parts of the game aswell.