Please visit the Home page for a special announcement

Although this game has been released, it remains under active development - information may change frequently and could be outdated or irrelevant.

Single player mods are allowed and are not a bannable offence. Disable any mods before going Online.[3]
Ability to import your music for your own custom radio station.

All versions require Rockstar Games Launcher DRM, and a Rockstar Social Club account in order to activate the game and play online[4] and Arxan Anti-Tamper DRM.[5]
Console players can redeem exclusive content in the PC version, including weapons, vehicles, events and money bonuses.[6] 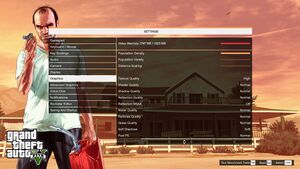 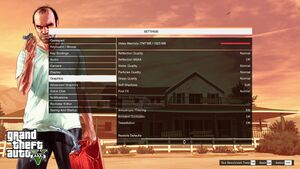 Mouse stuttering when moving with the keyboard

Online features require a Rockstar Games Social Club account.
Online characters can no longer be transferred from the console versions since March 6, 2017.[13]

Unable to start game on laptops with Intel-AMD switchable graphics

The game makes it past the launcher. However, when the main game loads it crashes instantaneously leaving you with a black screen, or the Windows error prompt.

The game crashes at random, with no error code, during cutscenes and missions where the game automatically switches between characters.

If you are experiencing trouble downloading updates with a retail copy of the game (e.g. repeatedly losing connection, restarting download from scratch etc.) you should use the -verify -noChunkedDownload parameters with the launcher:

"A complete overhaul of the original mod. Numerous changes were made to the environmental weathers, lighting system, ambient colors and tonemapping in order to blur the line between fantasy and reality." Much less performance intensive.[30]

Now you can play with Michael, Franklin, Trevor, Lamar, Lester, Ron, Wade, Amanda, Jimmy, Tracy and many others. You can go into vehicles as passenger, go inside interiors, open doors, hack pc and safes, use new vehicles, interact with new characters.

See Rockstar's list of available command line entries.
By creating a file called commandline.txt and saving it to your root installation folder you can alter the way your game runs.