GeDoSaTo can modify the game's internal resolution, anti-aliasing, Vsync, and shadow settings, and downsample from higher resolutions for improved anti-aliasing.

Download, then make sure it is updated with the included GeDoSaToUpdater tool. When done, go to Edit Settings, choose the "ffxiiiimg" profile in the bottom left and tweak the profile to your liking while keeping in mind the performance impact of each option (don't forget to save). Then simply run the game.

Note that as the assets of the game are only 720p. Depending on your configuration the 2D textures (such as font and HUD) can appear very pixelated.

Ignore this if you want to use GeDoSaTo. GPU support varies.

For NVIDIA users, in the NVIDIA control panel, in "Select a scaling mode:" under "Adjust desktop size and position", ensure "Full-screen" is selected and set "perform scaling on" to GPU. For AMD users, in the Catalyst Control Center, in the "Image Scaling" section under "Properties (Digital Flat-Panel)" where Digital Flat-Panel is the monitor type, ensure "Enable GPU Scaling" is checked and "Scale image to full panel size" is selected. This leaves the monitor at its resolution and allows the GPU to upscale the game instead of relying on the monitor.

Follow the guide on this post under the section "GeDoSaTo Setup" to create a driver profile for Final Fantasy XIII and enable the "AntiAliasing Fix" to fix block like artifacts on character hair.

Features dual audio English and Japanese for the ROW release.[6] Removing the FMV files for either language frees about 20 GB of space.[10]
Verification and updating by Steam will redownload the files.[11]

Non-configurable shadows that are pixelated and jagged.[12][13] Use GeDoSaTo to tweak.[14] 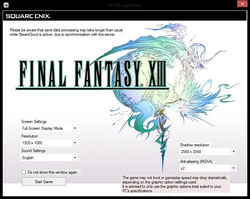 While there are several workarounds and fixes for inconstant FPS (an issue not entirely unique to the PC port[18][19]), for some this remains unresolved and may be due to issues with the game itself rather than tied to resource usage such as the GPU or CPU.[20]

Could not secure sufficient VRAM

This issue occurs when launching the game due to the inability to allocate the required VRAM.[21]
Check if you meet the system requirements through Steam. It can be done directly by entering steam://checksysreqs/292120 in a web browser. There are additional checks such as Can You RUN it available.[21]
Run "dxdiag.exe" and ensure at least 256MB is shown under "Approx. Total Memory" under the "Display" tab.[21]

Using Esc while in fullscreen mode may cause the game to immediately quit without warning instead of showing a confirmation dialog box.

This issue occurs when MSAA is disabled as it's required for proper alpha to coverage.[22]
This fix is for NVIDIA users. Normally AMD users cannot force AA off with the GPU control panel.

Full screen mode will only run on an environment that supports a screen resolution of 1280x720.
Officially recommends a XInput controller, but only supports DirectInput preventing XInput workarounds and assumes controllers are mapped the same as XInput controllers. Reports also indicate the game lacks controller vibration support found in the console versions.[6][23][24]