Command & Conquer: Generals is a singleplayer and multiplayer bird's-eye view RTS game featuring different factions battling against each other on a battlefield. It was developed by EA Pacific, published by Electronic Arts and released in 2003. The game is one of many in the Command & Conquer franchise. It makes use of the SAGE engine, which was an improved version of the Westwood 3D engine.

The game was initially released on Windows on February 10, 2003 on disc. It was on April 14, 2004 ported to Mac OS X by i5works and published by Aspyr Media, who also maintained the port over the years. Reception of the game was good, with several post-launch patches being released to fix most bugs, exploits and balancing issues. EA Los Angeles developed its expansion Command and Conquer Generals: Zero Hour, which got released on 19 September, 2003 on Windows and later ported to Mac OS X in February 2005. The expansion added a new Generals Challenge mode, new campaigns, new units and new maps.

As of August 2022 the game remains playable on modern Windows versions with some major technical hiccups that can be worked around; issues like errors when staring the game, DRM issues and serial key errors. A tool called GenPatcher was created by the community to more easily fix these issues, restore command line support for the Origin version, add modern resolution support and apply various fixes and improvements. The macOS version however was delisted from the Mac App Store in May 2020.

Online services have been discontinued by EA for all releases of the game, though can be restored by using C&C:Online. As of 2022 the game retains a small but active community.

SafeDisc retail DRM does not work on Windows Vista and later (see above for affected versions).
A free demo version is available from GameFront and CNCNZ.com.

The Deluxe Edition includes the base game and the Zero Hour expansion.
The Mac App Store did not have crossplay with the Windows and original OS X releases, and online muliplayer was eventually removed entirely in the v1.1.2 update after Apple retired Game Center invite functionality.[10]

Community-made tools that can be used to get the game in an optimal state without having to apply these improvements by hand. Includes many of the essential fixes/additions listed below like GenTool, DirectX installation, Options.ini fixes, dbghelp.dll removal and restoration of mod- and command-line parameter support.
Officially supports the CD, The First Decade (English) and Origin (English and German) versions of the game.
As this tool makes several changes to files of the game, installs various redistributables and makes various changes to the registry, it is often detected as a virus. This is a false positive. Add an exception to your anti-virus before running it to avoid this.

Also incorporated in GenPatcher.
Still actively supported and updates automatically.
It is essential for restoring online play by allowing the game to link to C&C:Online and adding cheat detection.
Fixes several known causes of crashes and exploits.
Provides improved compatibility with modern Windows versions, improved widescreen-support and enhanced/adjustable game controls.
GenTool is compatible with all Windows versions of Generals and its expansion, as long as they are patched to the latest official version.
The in-game GenTool menu, where you can access all its features, can be opened by pressing the Insert-key on the keyboard.

The latest version can be downloaded from the GenTool website. 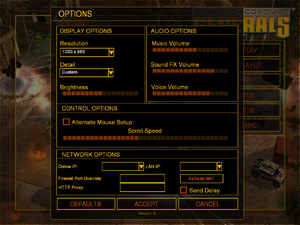 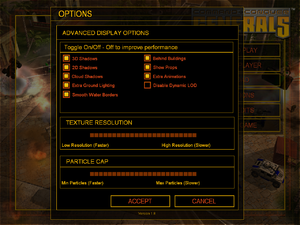 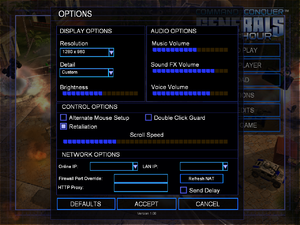 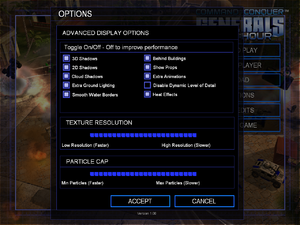 Improves compatibility and stability of the game significantly by converting all older Direct3D 8 API calls and low-level shaders to more modern Direct3D 9 ones.
Could possibly lead to unstable performance and could make the game crash with total conversion mods.
Compatible with GenTool and online multiplayer.
Not included in GenPatcher.

This error is shown in case of one of the many errors the game can encounter. It is thus often not clear what exactly causes this error; one of the methods below should fix most common causes:

The game can at times crash when using Alt+Tab ↹, in particular the second time. This happens usually when the game is set to resolutions that it originally did not support.[22]

Is triggered by DRM, even on legitimate installations.

"Serial key already in use" error when starting a match

For Generals, EA Los Angeles released an official extra map and mission that were not included in the game.

Open-source community-project to use reverse-engineered code of the original Zero Hour expansion pack to completely re-implement this code, while keeping true to the original game. The intention of Thyme is to allow the fixing of bugs, implementation of new features and porting to platforms unsupported by the original.
Only supports the original disc-based 1.04 versions. If you use any other version, the executable can be patched. Make sure you haven't applied GenTool, GenPatcher or replaced the executables by hand or patching will fail.
Thyme is often detected as a virus due to the way how it works. This is a false-positive. Add and exception to your anti-virus to avoid this problem.
Contains no auto-updater and has thus to be manually updated by downloading Thyme again and replacing the files.
Still in active development and not fully reverse-engineered yet. Expect it to contain several (severe) bugs.