Difference between revisions of "Age of Empires"

This page is for the original game. For the 2018 re-release, see Age of Empires: Definitive Edition.

This patch updates both Age of Empires (to 1.0c) and The Rise of Rome (to 1.0a): English, German, and French or Spanish, Italian, and Portuguese.
Alternately, the latest official patch is available at soggi.org.
The Rise of Rome 1.0a suffers from a serious bug in saved games. If a projectile (arrow from archers, ships, towers, siege weapons) is flying through the air while saving a game, the saved game becomes corrupted; loading it will crash the game.

Requires The Rise of Rome expansion
Unofficial patch that contains bug fixes and improvements for modern operating systems. Does not require any previous patches.
Fixes the color problem caused in newer systems
Fixes the save game corruption bug of version 1.0a

Use the NoStartup command line argument.[1] 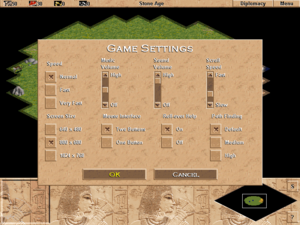 Playing the game on modern versions of Windows may cause it to use strange colors. Repetitive red and purple specks in water and marsh areas are the common issue.
See Rainbow color problems in older games for further information.